To share your memory on the wall of Harley Breiter, sign in using one of the following options:

Our Dad, Harley, passed away peacefully on January 30, 2021, at the age of 96. Dad was born in the Melfort area in 1924. His family moved to the Weldon district in 1936 where he attended Roosevelt School.
Read More
Harley Louis Breiter

Our Dad, Harley, passed away peacefully on January 30, 2021, at the age of 96. Dad was born in the Melfort area in 1924. His family moved to the Weldon district in 1936 where he attended Roosevelt School.

Dad loved to drive and earned his living by driving. His career included hauling fuel from Regina & Saskatoon to Weldon, & Kinistino, as well as delivering fuel to farmers in the area, for the Weldon Co-op. He also drove a school bus to Kinistino.

Dad lived in the Weldon community for 50 plus years. He skidded logs for the Weldon rink in the 1940s, owned and operated the Weldon café in the mid-1950s, as well as serving on the Credit Union and Weldon Housing Boards.

He knew everyone in the area and is remembered for his warm smile and dry sense of humour. Dad's early retirement years in Prince Albert were filled with travel, golf, and family. In his later years, while living in Birch Hills, when he was not playing solitaire while watching the weather channel, he could be found enjoying a coffee with friends and family entertaining them with stories of his life’s escapades.

The family would like to thank all the staff at Birchview Care Home in Birch Hills, SK for going above and beyond while caring for our Dad.

To send flowers to the family or plant a tree in memory of Harley Louis Breiter, please visit our Heartfelt Sympathies Store.

There are no events scheduled. You can still show your support by sending flowers directly to the family, or planting a memorial tree in memory of Harley Louis Breiter.
Visit the Heartfelt Sympathies Store

We encourage you to share your most beloved memories of Harley here, so that the family and other loved ones can always see it. You can upload cherished photographs, or share your favorite stories, and can even comment on those shared by others.

Posted Feb 03, 2021 at 11:02pm
My deepest condolences to you and your family. I will miss Harley so much. He was always in my heart and thought about him lots. This stupid Covid anyways. Much love from Vicky (greenhill lodge)
Comment Share
Share via: 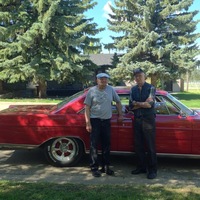