To share your memory on the wall of Kole Marchant, sign in using one of the following options:

Print
In loving memory of Kole Michael Douglas Marchant of Prince Albert, Sk. Kole passed away at the age of 32 on July 26, 2020.

Kole was born in Prince Albert, SK on June 27, 1988. He welcomed his son Nova into his world on October 10, 2016. Kole loved spending time with his son quading at dads and grandpas, playing at the park with his dog Zeus. He enjoyed dirt biking with friends and fishing with family. As a child he was an avid hockey player, skate boarder and loved snowboarding in the mountains. Kole was a genuine, kind hearted human being that would do anything for anyone. Kole would always build forts out of whatever he could get his hands on. Later in life that would be a reflection of his career as he worked on the pipelines and various construction jobs.

There will be a private viewing at Mackenzie Chapel on July 30, 2020.

We will miss you dearly Kole (Chuckie).

To send flowers to the family or plant a tree in memory of Kole Michael Marchant, please visit our Heartfelt Sympathies Store.

There are no events scheduled. You can still show your support by sending flowers directly to the family, or planting a memorial tree in memory of Kole Michael Marchant.
Visit the Heartfelt Sympathies Store

We encourage you to share your most beloved memories of Kole here, so that the family and other loved ones can always see it. You can upload cherished photographs, or share your favorite stories, and can even comment on those shared by others.

Posted Aug 01, 2020 at 04:39pm
So Sorry for your loss sherry, Doug, auntie Liz and families, thinking of you,,derm and dawn Zimmerman and family
Comment Share
Share via:
GS

Posted Jul 31, 2020 at 05:20pm
We are sorry and saddened to hear of the loss of your loved one Kole..Shery Doug and Family ,Liz and family,Hugs to all,,Dave and Gerri .
Comment Share
Share via: 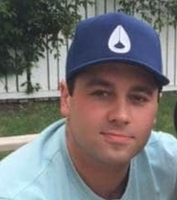