To share your memory on the wall of Karl Fekete, sign in using one of the following options:

It is with great sadness and broken hearts that the family of Karl Joseph Fekete of Prince Albert, SK, announces his passing on June 11, 2020 at the age of 75 following a recent cancer diagnosis. He was predeceased by his parents, Paul and Mary Fekete.
Karl will be lovingly remembered by his wife Rose, his son Dave (Anita), his daughter Tracey (Jordan) and grandchildren Kelso and London, his son Shannon (Lynn), son Jason (Susan) and granddaughter Siena. He will also be dearly missed by his brother Paul (Gwen), and many sisters-in-law, brothers-in-law, nieces, nephews and numerous friends.
Karl was born April 19, 1945 in Prince Albert, grew up on the family farm near Foxford, SK, and attended school in Meath Park. He met Rose in high school and they were inseparable from that point on – cherishing nearly 52 years of marriage together. Karl will be remembered for his extraordinary work ethic, his enormous heart and willingness to always help others. He logged one million miles driving a school bus part-time for several years right out of school. He then had a long and successful career managing Macleods hardware stores in Melfort, Lloydminster and Saskatoon, and the Macleods True Value store in Shellbrook. He later worked for about a decade at the Co-op Home Centre in Prince Albert until his retirement. Karl enjoyed going for daily coffee with friends, volunteering for the Heart and Stroke Foundation, and watching curling, baseball and hockey on TV. His love for banter was only surpassed by his enduring love for his family. His greatest enjoyment was spending time with Rose in their backyard and garden – it was their little piece of paradise in retirement.
The family would like to thank the staff in the Coronary Care Unit at the Royal University Hospital in Saskatoon, the life-saving paramedics with Parkland Ambulance Care, the staff at the Victoria Hospital in Prince Albert, where he passed away, and the staff at the Saskatoon Cancer Centre.
A private celebration of Karl’s life will be held for family and friends at MacKenzie Funeral Chapel, followed by a private interment at the Prince Albert Memorial Gardens. Arrangements in care of MacKenzie Chapel & Crematorium Brian and Bev Stobbs, Mervin Oleksyn, Renée Phaneuf – Funeral Directors. www.MacKenzieChapel.ca . 306.763.8488.
Read Less

To send flowers to the family or plant a tree in memory of Karl Joseph Fekete, please visit our Heartfelt Sympathies Store.

We encourage you to share your most beloved memories of Karl here, so that the family and other loved ones can always see it. You can upload cherished photographs, or share your favorite stories, and can even comment on those shared by others.

Posted Jun 19, 2020 at 11:38pm
So very sorry for your loss. We met Karl up at a Tim Hortons on Marquis Road. We had sat numerous timesnext to Karl, and as anyone who goes to Tims knows , a conversation began. He was such a nice man. We were so surprised to see he had passed away, as he always looked so happy and healthy. We just wanted to let you know, we will miss seeing him there, and the conversations we had. He was a special man. God Bless you all. With our deepest sympathies, Murray and Terry Gilmour
Comment Share
Share via: 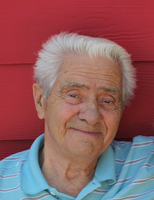