To share your memory on the wall of David Maxemiuk, sign in using one of the following options:

David passed away suddenly at Royal University Hospital in Saskatoon on March 20, 2020. David was born December 5, 1958 in Prince Albert.

David passed away suddenly at Royal University Hospital in Saskatoon on March 20, 2020. David was born December 5, 1958 in Prince Albert.

He was the youngest child of Mike and Anne Maxemiuk. David attended Connaught, Riverside and Carlton Comprehensive High School. He belonged to Prince Albert Chess club. He attended university in Saskatoon for 2 years. He was a letter carrier in Prince Albert. He attended Ambassador College in Pasadena, California, studying Theology. He received his B.A. He became a bus driver for the city.

His is survived by his wife: Marion; his son: Austin; his sister: Violet; his sister-in-law: Nancy (Eric); his brother-in-law: Edwin; his father & mother-in-law: Robert and Vicky Docking; his aunt: Mary Hallas; his cousins: Ron, Sharon and Marty (Joanne); as well as nieces, nephews and other cousins.

David was predeceased by his parents: Mike and Anne; his grandparents: George & Mary Maxemiuk and Bill & Annie Mykytiuk; his brother: Fred; and his uncles: John and Martin.
David was often seen taking his dogs Opal and Jocelyn for walks. He has done artwork for a few years, which he enjoyed. He was kind and considerate and assisted his sister in many ways. David will be dearly loved and missed by those who knew him.

To send flowers to the family or plant a tree in memory of David Michael Maxemiuk, please visit our Heartfelt Sympathies Store.

There are no events scheduled. You can still show your support by sending flowers directly to the family, or planting a memorial tree in memory of David Michael Maxemiuk.
Visit the Heartfelt Sympathies Store

We encourage you to share your most beloved memories of David here, so that the family and other loved ones can always see it. You can upload cherished photographs, or share your favorite stories, and can even comment on those shared by others. 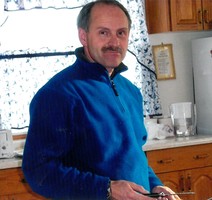