To share your memory on the wall of Lawrence Slater, sign in using one of the following options:

Print
Lawrence (Larry) Franklin Slater, age 85, passed away on Sunday, March 8, 2020 at the Victoria Hospital in Prince Albert, Saskatchewan, surrounded by his family.

Larry was born on July 31, 1934 in Prince Albert, Saskatchewan, to his parents: Frank and Matilda Slater. He grew up on the family farm and took his schooling in Henribourg. Larry married Margaret (Fern) Buchanan on August 3, 1957 and were blessed with three sons: Larry Jr., Kerry, and Randy.

Larry started his career working at the John Deere Dealerships in Henribourg, Nipawin, and Prince Albert. He then moved on to Groser Glass in Prince Albert and to Parks Canada in Waskesiu from 1966 to 1976. While working at Waskesiu, Larry returned to the Henribourg area and began a farming operation of his own. Larry then moved to a position at Indian Affairs in Prince Albert in 1976 and retired in 1989 from the Federal Government. During his retirement Larry enjoyed farming with his sons and visiting with their families. Larry was a pilot in his early years and later enjoyed woodworking and tinkering around the farm. Larry and Fern liked travelling and spent many vacations together touring by bus throughout Canada and the United States.

Larry is predeceased by his loving wife: Fern; parents: Frank and Matilda; father and mother-in-law: James and Peg Buchanan; sister and brother in law: Barbara McLeod, Jessie and Pete Soloducha and Jim Buchanan.

To send flowers to the family or plant a tree in memory of Lawrence Franklin Slater, please visit our Heartfelt Sympathies Store.

There are no events scheduled. You can still show your support by sending flowers directly to the family, or planting a memorial tree in memory of Lawrence Franklin Slater.
Visit the Heartfelt Sympathies Store

We encourage you to share your most beloved memories of Lawrence here, so that the family and other loved ones can always see it. You can upload cherished photographs, or share your favorite stories, and can even comment on those shared by others.

Posted Mar 10, 2020 at 07:33pm
To the Slater family:
I am sorry to learn of your father's passing. I first got to know him when he stopped in at Fire Control to talk to your mother. Whenever I met them, they were always interested to hear how we were doing. They were usually busy with things around the house and keeping up with the goings on of the kids and grandkids. They were proud of all of you.
Comment Share
Share via:

Thank you for the kind words Jim. 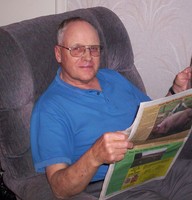