To share your memory on the wall of Linda Fornal, sign in using one of the following options:

Provide comfort for the family of Linda Fornal with a meaningful gesture of sympathy.

It is with heavy hearts that we announce the passing of Linda Fornal (nee Polle) on January 15, 2020, which happened peacefully in her home in Prince Albert, SK at the age of 87. Linda was born one of six children to Maria (nee Bohm) and Gustav Polle on July 16, 1932 in the small German village of Neudorf, Ukraine. She was part of a loving, very musical, happy family, who shared a deep sense of togetherness and strong faith. In 1951, at 18 years of age, she immigrated to Canada with her mother and three sisters, settling shortly after in Prince Albert. She married Mike Fornal on January 16, 1954 in Prince Albert and were wed for 43 years. Together they loved and raised five children. Family was always very important to her, and said, “I put my family first.” She lived by example, never raised her voice, and wanted peace and unity in the family. She instilled in her children the high value of education. She dearly loved and was proud of her children and grandchildren and their accomplishments. Linda treasured family gatherings and enjoyed her annual birthday celebrations outside in her beautiful backyard. She was a believer in hard work and took pride in her home, yard and very large garden. She was a private, modest, gentle, giving and dignified woman. Linda had a deep faith, being a lifelong member of the Messiah Lutheran Church. She later received her Home Care certificate, where she worked for Home Care for 10 years. Linda was a Parkland Health Region volunteer for 29 years and was a longtime member of the Prince Albert German-Canadian Club Waldhorn for nearly 50 years. The cabin at Candle Lake was somewhere she absolutely loved to be. Linda had a love of music, dancing, nature, yoga and painting. Her love of singing had her in four choirs: the German choir, the Senior Songsters, the church choir, and the Watsonairs. Linda was a devoted and loving wife, mother, Oma, Tante and sister, and will be deeply missed. Linda is survived by her five children, Anna Fornal (Michael Gollop) and son Alex Fornal-Gollop; Linda Fornal; Alex Fornal (Mary) and son Miles Coombe; Louise Fornal (Blair Gunter) and daughters Kristen and Megan Gunter; Christine Snider (Paul) and daughter Rachel; brother Bernhardt Polle; sister Teena Polle; and numerous nieces and nephews. She is predeceased by her husband Mike Fornal, parents Maria Magus (Polle) and Gustav Polle, stepfather Joe Magus, sisters Hilda Titarenko and Agnes Kiczak, and brother Hans Polle.
Anyone wishing to make a donation in Linda’s memory can do so to Messiah Lutheran Church in Prince Albert.
A Funeral Service for Linda will take place on Monday January 20, 2020 at 2:00PM located at the Messiah Lutheran Church in Prince Albert, SK. Interment at the Memorial Gardens Cemetery in Prince Albert, SK. Arrangements in care of MacKenzie Chapel & Crematorium Brian and Bev Stobbs, Renée Phaneuf - Funeral Directors. www.MacKenzieChapel.ca . 306.763.8488.
Read Less

We encourage you to share your most beloved memories of Linda here, so that the family and other loved ones can always see it. You can upload cherished photographs, or share your favorite stories, and can even comment on those shared by others. 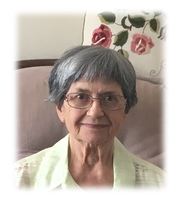