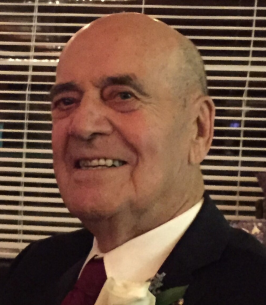 It is with great sadness the family of Loyd Smith, late of Prince Albert, SK announces his peaceful passing on September 10th, 2022, at the age of 97 years. Loyd was born in Lanigan, SK on March 13th, 1925, to Paul and Mabel Smith. Loyd was the youngest of 8 children. He grew up in Choiceland, SK, and in 1943 at the age of 18, he left home to serve in WWII.
When Loyd returned to Prince Albert in 1945, he worked at the box factory where he met his wife-to-be, Verda Biggar. They were married in 1950 and together they enjoyed Air Force life for the next 25 years. They were blessed with 2 daughters Marilyn and Barbara. Over the years the family made their home in various places throughout Canada. They eventually lived in Saskatoon until 1985 when they moved to Candle Lake and then onto Prince Albert.
Two years after Verda passed away, Loyd met his second wife, Irene Dobson. They had a wonderful 20 years together, traveling to Arizona, dancing, playing cribbage, and enjoying life.
Loyd was a proud member of the Royal Canadian Legion for over 50 years. Loyd and Irene enjoyed their weekly coffee and visits at the PA Legion. Loyd was a true gentleman, had a great sense of humour, enjoyed family visits, and will truly be missed by so many.
Loyd is survived by his loving wife Irene; his daughters Marilyn (Bill) Osborn of Saskatoon, SK, and Barbara (Charles) Mathiason of Prince Albert, SK; his grandchildren Jay (Sheri) Stark, Lana Stark (Francisco), Jordan Tupper, Nathan (Tandra) Tupper, and Jarrett Tupper; his great-grandchildren Lexie, Sydney, and Bryce; our blended family, Dwight (Pat) Bergstrom, Dixie (Lorne) Tuck and their families.
The family would like to send a special thank you to the Saskatoon Cancer Clinic, Prince Albert Home Care team, and the Victoria Hospital 5th Floor staff who all provided such loving care to our dad.
A Funeral service will be held for Loyd at MacKenzie Chapel on Friday, September 16th, 2022, at 11 AM, with interment to follow at the South Hill Cemetery (Veteran’s Section). Condolences can be sent to the family on our website at www.mackenziechapel.ca. Arrangements in care of MacKenzie Chapel & Crematorium. Brian & Bev Stobbs, Mark Gyoerick - Mel Curle. 306.763.8488.