To share your memory on the wall of William Housen, sign in using one of the following options:

Print
It is with great sadness that we announce the passing of William (Bill) Housen, late of Saskatoon, SK formerly of Shellbrook, SK on April 6th, 2021 at the age of 92. Bill was born January 2nd, 1929 in Unity, SK and was taken to his new home by horse... Read More
It is with great sadness that we announce the passing of William (Bill) Housen, late of Saskatoon, SK formerly of Shellbrook, SK on April 6th, 2021 at the age of 92. Bill was born January 2nd, 1929 in Unity, SK and was taken to his new home by horse and sleigh. He grew up on the family farm 6 miles west of Unity. He attended the rural Belton School which he had to walk 1 ½ miles to get to. After the 8th grade, he lived with his grandmother in Unity to finish his grade 12.
He worked a year with the railroad company then decided more education was the route for him. After completing a one-year course at teacher’s college, he landed his first teaching job at a one room school in Fisque, SK. He taught for 1 year then was accepted as principal/teacher at the Plato, SK three room school where he stayed for several years. This is where he met his future wife Pearl in Plato, SK and they got married in August 1955. They decided if Bill was going to continue teaching, he should go to university and get his degree. Bill earned his Bachelor of Education degree and accepted a teaching position at Elrose Composite School. They moved to Elrose, SK in 1959 where he began teaching. After 10 years of teaching, he then became principal of the school for 3 years.
In June of 1964, their first son Trevor was born, and their second son Paul was born in November of 1966. Bill enjoyed his 13 years in Elrose then moved to Shellbrook in 1972 when he accepted the superintendent position for the Parkland School Division. He finished his career as Director for the Parkland School Division in 1986. After retirement, he worked part time as the superintendent for the Ahtahkakoop First Nation School for 2 years. The kids there referred to him as “Mushom” which means Grandfather. He enjoyed that title.
Bill was an avid fisherman, and he frequented a lot of local lakes. He went on many fly out fishing trips over the years with a few of his teaching colleagues. Bill cherished the fishing he did up north with his son Trevor, who is also an avid fisherman. Bill enjoyed his fishing experiences in the NWT, when he and Pearl would visit with their other son Paul in Yellowknife, NWT. He even got the chance to go deep sea fishing with Trevor when they were in Mexico.
Bill and Pearl really enjoyed camping, they took their boys all over from Riding Mountain National Park in Manitoba, all over Saskatchewan, west to Radium and Fairmont Hot Springs, & Vancouver Island.
Every summer you could find Bill and Pearl tending their garden in Shellbrook. They both enjoyed the rewards of their labour with plenty of fresh vegetables.
Bill was a dedicated Elks Lodge member for many years. He put in countless hours of volunteer work at many functions hosted by the local Elks Club. Bill developed many lasting friendships with these members. In the wintertime you could find Bill at the local arena cheering on his sons in minor league hockey games or during the popular Elks hockey league or junior b Knights games. He could also be found next door at the curling rink as he enjoyed participating in this sport for many years.
Tragedy struck the family in December 2006 when Bill’s loving wife Pearl suddenly passed. He continued to live in the family home on his own, until 2011. Reluctantly, Bill moved from Shellbrook to Saskatoon to be closer to the boys. He moved into an independent living facility named Parkville Manor. He resided there for nine years and enjoyed the friendships of many residents. He spent his last 3 months living with his son Paul and daughter-in-law Trudy. This short time was enjoyed very much by the family.
Bill was a very fine gentleman, always humble and kind. He never had a bad word to say about anyone. He was always cheery and would say hello to anybody. Bill was a dedicated father and family man. He will be greatly missed and fondly remembered always. We love you Dad. God bless.
Bill is survived by his sons Trevor (Wendy) and Paul (Trudy), his granddaughter Nicole, his sisters-in-law Joyce (Mark) & Betty, and his brother-in-law John (Joan). As well as numerous nieces and nephews.
Bill was predeceased by his loving wife Pearl, his parents Fred & Eula, his brother Maurice, his brothers-in-law Bobby, Ray, Billy, Harold, Donny, Al, and Gerald and his sisters-in-law Audrey and Marge.
Bill deserved a large celebration of his life for his dedication to Shellbrook all those years and being such a wonderful human being. Unfortunately, the service will not be open to the public. Due to Covid-19 restrictions the funeral service is limited to immediate family only. Condolences can be left for the family at MacKenzie Funeral Home Website at https://mackenziechapel.ca/book-of-memories/4582612/Housen-William/index.php. The service will be recorded, and once available can be viewed through the MacKenzie Funeral Chapel website. In lieu of flowers the family asks to please send donations to the Saskatchewan Lung Association, 2308 Arlington Avenue, Saskatoon, SK S7J 3l3 or go to www.lungsask.ca. Arrangements in care of MacKenzie Chapel & Crematorium – Shellbrook Funeral Home. Brian & Bev Stobbs, Renee Phaneuf & Mark Gyoerick. www.MacKenzieChapel.ca 306.763.8488.
Read Less

To send flowers to the family or plant a tree in memory of William Harvey Housen, please visit our Heartfelt Sympathies Store.

There are no events scheduled. You can still show your support by sending flowers directly to the family, or planting a memorial tree in memory of William Harvey Housen.
Visit the Heartfelt Sympathies Store

We encourage you to share your most beloved memories of William here, so that the family and other loved ones can always see it. You can upload cherished photographs, or share your favorite stories, and can even comment on those shared by others.

Posted May 05, 2021 at 04:05pm
My sympathy to Trevor & Paul. Your Dad & my late husband spent many years in the teaching profession. Summer holidays began with a fishing trip to a fly in fishing camp. These thoughts still linger with me. Sincerely, Jean Zawada
Comment Share
Share via:
AP

Posted Apr 24, 2021 at 10:47pm
I taught in Plato and Bill was principal. He was a good friend and Keith(Porter) and I, along with others spent many happy times with your Mom and Dad. Your dad and Keith enjoyed their fishing trips. I did not know he was living in Saskatoon. It would have been nice to meet again. Fond memories. Sincere sympathy
Anne Porter
Comment Share
Share via:
C

Posted Apr 18, 2021 at 09:20pm
Trevor & Paul and families, ..I was so sorry to hear about your Dad. I have very fond memories of your Dad and your mom.. neighbours down the street....I remember your Dad walking to work and always a smile, wave and a "hello". I also remember the beautiful gardens and yard that they always had. Such a wonderful written obituary to show all the kindness and the good memories of your Dad and Mom.
Take care Trevor and Paul...thinking about you both during this time and remembering the good life growing up in Shellbrook..
..from the neighbour girl down the street. ...Julie (Steckler) Zorn
Comment Share
Share via:
D

Posted Apr 17, 2021 at 01:24am
To all of Bills family
You won’t know me but I met Bill on a cruise by Lobstick tours ,several years ago.
A group of us ( 4 gals) had the privilege to share a Dinner table with Bill.
One doesn’t forget a gracious ,caring gentleman that he was.
A great conversationalist,and a great listener ,he had to be with 4 gals
chattering at his table.
RIP Bill. 💕🙏
Diane ( Worley)
Comment Share
Share via: 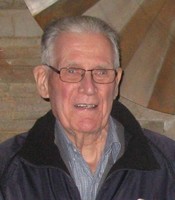