To share your memory on the wall of Margaret Von Eschen, sign in using one of the following options:

Provide comfort for the family of Margaret Von Eschen with a meaningful gesture of sympathy.

We were fortunate to have our mom at home with us during our growing years. Mom and Dad were our biggest cheerleaders and always supported us in any sports or events we participated in. Mom never missed a chance to sit in the bleachers. Whether it was hockey, baseball, soccer, figure skating, skiing, judo, drama, music, art exhibits, girl guides, scouts, choir, dance, she was there for all of her kids and grandkids. Mom was a member of the PA legion for 54 years. She enjoyed sewing, baking preserving, reading, and puzzling, as well as camping, but mostly she enjoyed spending time with her family. Family gatherings were very important, and it was not unusual for mom to cook a thirty-pound turkey and have 40 people for dinner. The welcome mat was always out.

Once Dad retired, Mom & Dad enjoyed many trips, following their beloved PA Raiders, cruises, bus tours, camping trips in their little Boler camper, and visiting their grandchildren. Even after Dad’s passing, mom continued her love of travel; a train trip to BC, a trip to Scotland at age 85 and a shopping trip to Minneapolis at age 89, and numerous road trips to see her kids and grandkids.

Margaret continued to live in PA until her health began to decline. She then settled into her new home at Diamond House in Warman, where she was cared for and loved as one of the family. She continued reading, doing crosswords and jigsaw puzzles for as long as she could, as she really enjoyed challenging herself.

A private family service will be held, with a celebration of life to be scheduled at a later date. Arrangements in care of MacKenzie Chapel & Crematorium Brian and Bev Stobbs, Mervin Oleksyn, Renée Phaneuf – Funeral Directors. www.MacKenzieChapel.ca . 306.763.8488.
Read Less

To send flowers to the family or plant a tree in memory of Margaret Jean Von Eschen, please visit our Heartfelt Sympathies Store.

We encourage you to share your most beloved memories of Margaret here, so that the family and other loved ones can always see it. You can upload cherished photographs, or share your favorite stories, and can even comment on those shared by others. 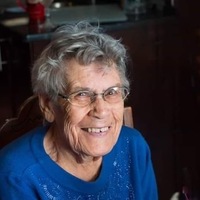