To share your memory on the wall of Dorothy Hunter, sign in using one of the following options:

Provide comfort for the family of Dorothy Hunter with a meaningful gesture of sympathy.

Print
Dorothy A. Hunter (Rideout), 86, of Birch Hills, SK, passed away peacefully on December 23, 2019 at Victoria Hospital in Prince Albert, SK.
Dorothy was born on December 12, 1933 in Twillingate, NL to Elmo and Mary Rideout.

Her pare... Read More
Dorothy A. Hunter (Rideout), 86, of Birch Hills, SK, passed away peacefully on December 23, 2019 at Victoria Hospital in Prince Albert, SK.
Dorothy was born on December 12, 1933 in Twillingate, NL to Elmo and Mary Rideout.

Her parents both passed away when she was around 10 years old, at which time she went to live with her Grandparents and Great Grandfather Robert Rideout.
Over the years Dorothy has a lot of jobs including being a nanny for a local doctor's children, until she graduated high school. She then worked at a US Airforce Base for a Colonel, which at one point required her to parachute out of a perfectly good airplane into the Atlantic Ocean!

She eventually came out to Saskatchewan, with her daughter Sharon, to work for Mr. William Hunter as a housekeeper. Dorothy and Willie (as he was known by) got married and had three more children; Wendy, James, and Cindy.
They remained on the farm for many years. Willie eventually retired from farming and auctioned off the equipment in 1998.

Dorothy remained on the farm after Willie's passing until she had a stroke. She then moved to an apartment in Kinistino where she could be close to Sharon. From there she moved to River's Edge home in St. Louis, which was her last residence.

Dorothy enjoyed talking on the phone and visiting in person with all her cherished family and friends, including her friends Sonny and Dorothy who she met at River's Edge.

Dorothy was predeceased by her parents: Elmo and Mary Rideout; her sisters: Alberta Barnes and Phoebe Froude; her daughter: Wendy (Hunter) Ulvild; and her husband: William Hunter.

Dorothy will eventually be laid to rest with her husband, Willie, at the Birch Hills Cemetery in a private graveside service.

Special thanks to the staff at River's Edge who cared for her. In lieu of flowers, donations can be made to the Canadian Cancer Society in her memory http://www.cancer.ca/en/?region=sk . Arrangements in care of MacKenzie Chapel & Crematorium Brian and Bev Stobbs, Renée Phaneuf - Funeral Directors. www.MacKenzieChapel.ca . 306.763.8488.
Read Less

We encourage you to share your most beloved memories of Dorothy here, so that the family and other loved ones can always see it. You can upload cherished photographs, or share your favorite stories, and can even comment on those shared by others. 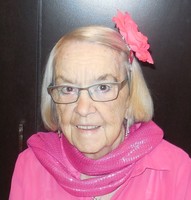