To share your memory on the wall of Bernice Sellsted, sign in using one of the following options:

Print
Bernice Bernadette Sellsted (nee Allary)
Born at Cresent Lake SK December 21st 1931
Death June 5th 2019 Prince Albert, SK
Bernice was the second youngest of Fredrick and Philomene (nee Pelletier) Allary. She will be lovingly rememb... Read More
Bernice Bernadette Sellsted (nee Allary)
Born at Cresent Lake SK December 21st 1931
Death June 5th 2019 Prince Albert, SK
Bernice was the second youngest of Fredrick and Philomene (nee Pelletier) Allary. She will be lovingly remembered by her Sister Mary Brazeau of Yorkton and many nieces and nephews loved her like their own mom. Her God children Keon Flamont, Lloyd Brazeau, Lynda Allary Tait and Gary Pelletier. She will be especially missed by her two youngest children who were lucky to have been with their mom throughout their lives until her last breath, John Melenchuk and Leanne (Hal) McLeod. Bernice is survived by her other children, sons Andy Melenchuk, Dennis Hooper, daughters Michelle (Larry) Pasula, and Joanne (John) Dean. Bernice was blessed with numerous grandchildren and great grandchildren many of whom have fond memories of her. Finally, her special grandchild Jessica McLeod whom she helped raise was the light of her life.
Bernice was always doing something she enjoyed be it bingo, sewing, and her cooking of cabbage rolls, perogies, pies, and bread were legendary. She especially looked forward to large family gatherings where she could cook for her family. She loved spending time with her brothers and sisters especial the Brazeau families and the Allary families and teaching her nieces how to make pies. Bernice had very little education but spoke five languages. Together her brothers and sisters spoke the Metis language a mix of three languages, and English. Bernice also learned to speak Ukrainian taught to her during her first marriage.
Bernice always spoke proudly of her mom Philomene and how she worked hard to help the people of her community. She would say things like, “Mom would be gone again to help with delivering a baby, or she would be in Regina working with Tommy Douglas and CCF.” Later, she learned about the important work her mom was doing. It was to ensure education and health care lead the way for the Metis people of the province. A school was eventually built in the Crescent Lake community twelve miles south of Yorkton, SK. Bernice was too old to attend Meadow View School for very long by the time it opened. But, she was very proud of her mom for petitioning the government to have it built. The school was later rededicated as the Allary School by the people of the community in honour of Philomene. Bernice didn’t receive very much education herself, she did with her stories instill in her children this recognition and value of their grandmother’s contributions to her community. As well as, the importance of their Metis heritage which will live on forever.
“My bum, my chum, my mum,” was her son Andy’s favorite jingle for her. It was this son that found the remaining siblings and brought them home to meet their birth mother. They remained connected through phone calls and family gatherings throughout most of her life. She would always wait for that phone call on Mother’s Day, Birthday etc. and bragged proudly to each of her children whom was the first caller. Bernice had musical talents which included guitar and accordion playing accompanied with her singing. She enjoyed country and gospel music. Bernice loved going to concerts with her son John. He took her to Charlie Pride, Kenny Rogers, and George Jones.
Despite her having a hard life in her early years, with very little education and children taken away, Bernice learned to overcome hardships. Her younger daughter states, “Mom gave me so much with very little. She taught me about love and forgiveness.” She lived for many years in Sherman Tower however, in 2015 Bernice had a stroke (Vascular Dementia) Alzheimer’s began making a presence in her life. Her memory progressively began to fade till she had no memory of people or places in her life. She lived her last few years first with her daughter Leanne (Hal) and son John. Bernice and her son-in-law Hal had a special bond. They would go for daily coffee drives or he’d play music and sing while she clapped. They were always teasing each other. This was routine until it was necessary to move Bernice to her final home at Mont St. Joseph care facility.
Bernice was predeceased by her parents, her sisters Celina Pelletier, Helen Shingoose, Edna Allary and Yvonne Allary. Her brothers, Isadore Allary, Alex Allary, and Bill Allary, her granddaughter Jennifer Pasula and son Steve Melenchuk. As well as numerous nieces and nephews. Arrangements in care of MacKenzie Chapel & Crematorium. Brian and Bev Stobbs, Renée Phaneuf - Funeral Directors. www.MacKenzieChapel.ca 306.763.8488.

To send flowers to the family or plant a tree in memory of Bernice Bernadette Sellsted, please visit our Heartfelt Sympathies Store.
Print

We encourage you to share your most beloved memories of Bernice here, so that the family and other loved ones can always see it. You can upload cherished photographs, or share your favorite stories, and can even comment on those shared by others. 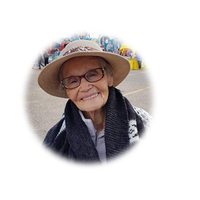